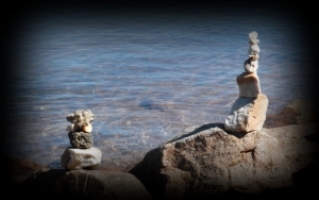 In the sky’s last Tanzanite light,

to tantalize the shoreline.

They are the temporal tributes

to the last day’s play.

ready to blend with the night

as they rest on the rhythms of the water.

And the ripples fade without a fight.

*The first version was in a rhyming style. It is based on notes of raw material I scribbled as we traveled. Later, it developed into version 2, a more developed  version without a rhyme scheme. The poems can be read literally, but they are actually meant more as metaphor.

*Tanzanite is one of my birthstones and is  beautiful. Discovered in the late 1960s in Tanzania, and found exclusively in this tiny area of the world, tanzanite exhibits a rich dark blue to violet-blue color for which the gemstone is treasured.