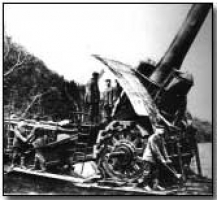 This must have been what hell is like. The sound of the guns from the Somme could be heard 150 miles North in Birmingham England. http://www.thelearningcentre.org/ww1/sect2_p4.htm

On the 24th of June 1916 as a preliminary to the planned offensive on  the  River Somme in Northern France, the British artilliary of  the  fouth Army opened the final stage of a bombardment of enemy positions. That  bombardment was the culmination of an Artilliary barrage that had started  20 days ealier. It was to become the longest continuous Artilliary barrage in History.

The British fire power was phenominal. There were 427 guns ranged against German defences, one gun for every 58 yards across the line of the front. In the final three days of the Bombardment British  artilliary fired 1.75 Million shells and it is estimated that during the total bombardment which opened on 5th of June with light field guns, over a third of  a million tonnes of shells were fired.

Yet despite the fierce onslaught it failed to break german defensive positions
and allow free passage to advancing troops on the 1st of July.

To that end the barrage was a failure, it failed to break Weremacht morale and only proved the saying coined at Verdun

The one objective of the battle of the Somme was bought at terrible cost, that was the relief of verdun for the French defenders as german high command was forced to move troops away from  the  beleagured city to defend the position on the Somme.