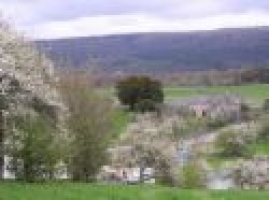 A drift into the times I began fly fishing in Western  Shropshre.
'How camest though to such as this, that one with stout flyfishers wrist, should become a worthless Journalist'

Still Searching For That Cuckoo by M.A.Meddings

There is no other English county quite like Shropshire. A. E. Houseman wrote of it, yet rarely ever visited it. In the early 1960's as a young man I read the poems of Houseman and the short 'country matter' stories of A E Coppard, and visited Shropshire a neighbouring county to my own Worcestershire. In west Shropshire was a trout stream, where the wild trout went 2 to the pound mostly, with the odd leash going on 40 ounces.

The river was a prodigious producer of trout and a paradise for young fly fisher such as I.

I was a 'dryfly' man and the fish on the Onney came well to the surface fly such that on one never to be repeated day June 12 1966, during a heavy emergence of mayfly I took Thirty Five trout to surface fly, returned every one alive and carried on fishing into the evening.

At Halford on the Onney where the West and East Onney meet there was a triangular shaped meadow full of flowers. I used to take lunch there and often fell asleep in a place where no one had come it seems since the beginning of the century. Across the river from where I lay was a Damson orchard. One of the old trees was a sentinel post for an itinerant Cuckoo who sang me to sleep.

It seems that since then I measured every place I fished in the world with that topmost beat of the river Onney. I guess I am still searching to hear the sound of that cuckoo. This poem is about that time.