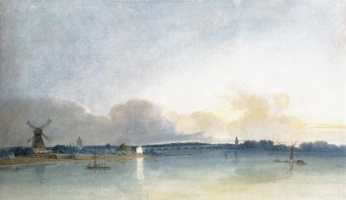 The most famous English watercolour of all time?  I wonder how many thought Turners The Fighting Temarare was. http://www.artinthepicture.com/paintings/view.php?nr=2651

Thomas Girtin had a tragically short career, dying of tubercolosis at the young age of 27. He was, in that brief period, from around 1790 to his untimely death in 1805, to stand astride English landscape painting like a Collosus.

He provided the key to a change in British  watercolour landscape painting, from a largely monochrome topographical sketch sideline, to the full blown art form we know today.

His influence and style can be seen in the work of the previous artist  in that of Turner, with whom he was so closely aquainted, to that of Bonnington, Chrome, Cozens, Cotman and their Associates.

The paintng shown is on public view at the Tate gallery in London and is well worth going to see.

Girtin was born in 1775 at  Southwark , the son of a wealthy brush maker of Huegenot descent. His father died young and his mother then married a Mr Vaughan a pattern draughtsman. It is from his stepfather that he gained the impetus  to start him sketching and painting landscapes in the traditional manner.
At the age of 16 he became Apprenticed to an Artist know as Edward Dayes, and during his time there, although he was treated badly by his master, he learned his craft. The relationship ended rather abruptly when Dayes in a fit of anger about Girtins success had him arrested on a trumped charge under the Common law of master and servant.

Girtin by then had become close to Turner and they both took drawing lessons from Dr Munro a celebrated drawing master who took many famous watercolourists through his classes. They included Turner, Girtin, Millais, Holman Hunt, Ruskin and many of the pre Raphaelite brotherhood.

It is well to remember that Watercolour painting at that time was considered a 'cinderella' medium not even fit for inclusion to the summer exhibitions of the Royal Acadamy. The watercolour artists therefore became a close knit community and were forced to form there own society. The embryo of what we know as 'The watercolour society was founded from early group meetings of the associates

Girtin was in at the start and his influence spread. By 1794 he was exhibiting at the Royal acadamy after that body reluctantly agreed to include watercolour artists work.

His early submissions were the typical topographical sketches I mentioned earlier but they serves to show a wider audience the power of the medium.

Girtin seems to have developed a more romantic style around then along with a new range of colours in a very subtle pallette. These included warm browns and sepias, slate greys, purple and indigo. This pallete was to become the proffessionals basic colour set. A very limited chice but capable of mixing and combining with such effect. It is that colour range on which most English water colours are best known, and marks the discipline needed in the use of brush and water that defines the skill. Girtin is considered to have begun what is known as the 'Romantic' style of English water colour painitng

Turner once remarked 'Had Girtin lived then I would have surely starved'.

In 1800 Girtin entered a highly influential social world when he married the 16 year old daughter of a wealthy Goldsmith. his career then took off as he became the favoured artist of many well connected and wealthy patrons.

Unfortunately it was short lived. By 1805 he was dead, yet his influence lived on.

The painitng I introduce is to a certain extent a strange move from convention and marks Girtins vision. The title is easy to see. The whitehouse itself shines like a beacon and naturally draws the eye to the point just left of centre where it denotes the golden section. Yet that golden section in my view is almost an afterthought.

Note how the flow of the painting moves from left to right along the bank on which the Windmill stands. Is it not that bank where all the business of the painting is concentrated? For years I looked for a golden section to the left of the painting yet found little inspiration.

I tried to give the left hand edge of the windmill and the horizontal line of river bank as parameters to the golden section. Yet all that waters edge served to do was to direct me to that white house and the river bridge.

The whole painting leads to that white house and the bridge and the busiest part of the painting seems in my view almost an afterthought. It is not of course but I know of no other watercolour where one relatively tiny spot, viz the white house so effectively commands the eye of the observer and denotes the power in the painting. That is why in my view it truly is the most spectacular of all English watercolours. It has, like the eyes of  The Mona Lisa an enrapturing hold on the observer.

The effectiveness and brilliance of the white house itself does much to help this effect yet it was not painted as such.

Early watercolourists treated their paper after stretching it with a thick coat of chinese white. Over this base coat they painted often with colour directly from the tube and with minimum watering down. once the painting had dried they would scratch away the upper surface to reveal the white under layer as a highlighted spot.

In many ways, centrally commanding the painting as it does, the white house detracts from the rest of Girtins skill as an artist. Try  if you will to view the painting objectively without returning to that infernal white house. Enjoy the fun please.