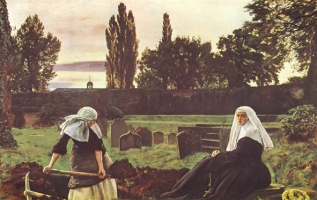 
'The Vale Of Rest' by John Millais - an assessment by M.A.Meddings

What is not immediately apparent to the casual observer are number of subliminal images contained in this work by John Millais painted in 1858 and later repainted in 1862 in order to perfect the figure of the Nun toiling at digging the grave.

It was in my view one of Millais most 'sinister' works of art and i find within it an antithesis of what one might suppose is contained therein. Outwardly it is a religious work yet if one examines the painting a little at a time one finds a host of secular images that are so prophetic  mankind that it easily out ranks in my view that other master piece by Millais contemporary William Holman Hunt  'The light of the world'.

I find no love as some do in the painting, not even the love of god for in my view the picture expresses all the excesses of human nature and to that end rather than being a peaceful painting as the title suggests i find it to be full of turmoil.

The central figure and the boundary of the golden section is the Nun embroiled in the task of digging. Millais has in one fell swoop defined the central theme of dogged determination to complete the onorous task of internment before the light fades.

Just take heed of the womans apron soiled and crumpled as of one who has toiled day long under the hot sun and who now towards evenings has seen the results of her efforts almost reach completion.

Do you see how the muscles of her forarm flex and moves as she lifts each clod of earth . one can almost feel the ache and cramp in her muscles as she lifts and throws the earth. What finer example in British art is there of the dogged determination of one in the service of the lord to do her duty come what may. Is not hers the sense of loyalty and service that Christ gave at Golgotha.

Yet what of her companion who sits and watches the toil of others is there not a mark upon her prisitine habit, and does not the smug smile on her face signify the idea that 'Dont look at me to help I am doing my bit in prayers at Vespers' such toil is for noviciates. True worship of the lord is for finely dressed ones such as I

Such a prephetic idea so cleverly immortalised here. The worker and watcher, the giver and taker, images of selfless devotion and selfish involvement, or lack of it. When it was painted a powerful exposition of much of Victorian society.

It was a brave  device that Millais uses to great effect for non but the pre Raphaelites would use two religious forms to suggest good and bad toil and idleness. Millais achieves it spectacularly.

Yet there are within the painting deeper less obvious themes.

Note the bell in the tower central to the back ground. Still now yet minutes from now it will begin to toll the death knell, it is that kind of bell a single stoke every five minutes through out the night until dawn, what an image of impending doom, as is the black cloud looming in the evening sky.

Approaching night, the end of mankind, As did a sudden darkness descend at the cross as Jesus died .

Even the subdued lighting from the left hand side of the painting suggesats the fading light of an April evening yet form the look of the trees this painting depicts a cemetary much later in the year.

So important was the figure of the digging Nun to Millais theme that it is known that he painted and repainted her again and again unti lhe got it right.