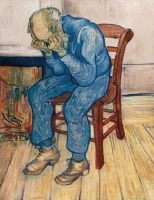 On 26th January, I went to the Republic Day poetic meet of the AMU University. There I heard Prof. Munib-ur-Rehman, who for the last 30 odd years lives in Michigan, USA, recite his poem, "Tanhaee"-'Loneliness'-it moved me to tears...

He stood there, tall and impressive, as ever,
Only when he got up with the help of his blind-man’s-stick,
You noticed, he could hardly see, the hearing aids told another story,
The shock of grey on the broad forehead, the hair line receding just as it did,
The same kind expression of his eyes- that crinkled at the corners as he smiled,
The same deep throated mesmerizing voice, the same engaging way, as he began to recite;
But, his poem, ‘Tanhaee’, brought tears to my eyes; the plight of an old man was its surmise:
Alone and lonely in the far off land, in the cold climes of Michigan he stands

At the window of his Condominium and muses, about his dear motherland:
Why did I leave my home and came so far, away from the sunrise and nightfall’s
To this cold land where sun hardly rises, where nights are long and starless and forlorn;
The jungle of concrete, reminds of the green forests of home; where birds chirruped to herald in the dawn,
Where peacock danced with first shower of rain; where flower bloomed whole year long…
Where friends gathered around the fire every day; recited poetry in mallow way;
When he stood on the stage and acted in plays; kept the audience spell-bound in his sway;
Where warmth exuded from every heart, where Ghalib and Mir where order of the day;
When night came he gazed at the stars, and wrote poems to his sweetheart…
Now she is gone, and in her grave laid, his children are scattered all over the place;
They do come sometimes; they love him too, but have to go back to their families too;
Now nights are starless, lonely and blue, he lies awake in bed, thinking of youth…
He can’t read a book, the sight failed him too, and listening to music is an effort too;
Dependent on other for his daily chores, he suffers and waits for his turn too…


Do I see my tomorrow in those soulful eyes?