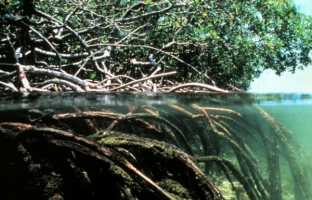 The water stood depths in metre in the delta
and the heat was suffocating wet
quantities of herons and water birds of
different kind sat resting in the trees' shadows
waiting for today's lunch.

archer fish goes fishing
chasing scale rams through shooting
down them with a water beam.

On an obvious signal lifted the birds from the trees
in order to catch fish that not succeeded
take itself out in the sea with the tide, the mangrove delta
liver up with a splendid display of colour and lives
in abundances, as an enormous pantry.

A bird did a magnificent vacation in
the bay and caught a fish that it swallowed
in the escape out against the open sea. The sun lowers
itself rapid average sky and seas, the colours
sparkling from orange red and blue.

The night comes hugely rapidly and puts
black darkness over the delta, the last light
tones low-speed out. Pants to and near is it
entire jet blackly, only the sounds from insects
and birds are consulted in the night.